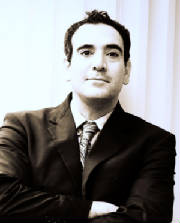 AARON POOCHIGIAN was born in 1973. He attended Moorhead State University from 1991 to 1996 where he studied under the poets Tim Murphy, Dave Mason and Alan Sullivan. He entered graduate school for Classics in 1997 at the University of Minnesota. After traveling and doing research in Greece on fellowship from 2003—4, he earned his Phd in Classics in 2006. He was a visiting professor of Classics at the University of Utah in 2007—8 and D.L. Jordon Fellow at Roanoke College in Salem, Virginia from 2008—2009. He now lives and writes in New York City.

He has recently completed translations, with introduction and notes, of Sappho’s poems and fragments for Penguin Classics (due out Spring of 2009). His translations of Aeschylus, Aratus and Apollonius of Rhodes will appear in the Norton Anthology of Greek Literature in Translation (due out Spring of 09), and Johns Hopkins University Press will put out his edition of Aratus’ astronomical poem, The Phaenomena, with his introduction and notes, in the Spring of 2010. His original poems have appeared in numerous journals, including Arion, The Dark Horse, Poetry Magazine and Smartish Pace.