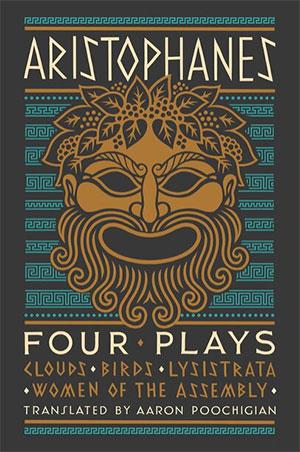 Translation of Aristophanes: Four Plays (Clouds, Birds, Lysistrata, Women of the Assembly) by Aaron Poochigian, now available for order from Liveright, Amazon, Barnes and Noble, Foyles, and other online and offline bookstores worldwide.

The citizens of ancient Athens enjoyed a freedom of speech as broad as our own. This freedom, parrhesia, the right to say what one pleased, how and when one pleased, and to whom, had no more fervent champion than the brilliant fifth-century comic playwright Aristophanes. His plays, immensely popular with the Athenian public, were frequently crude, even obscene. He ridiculed the great and the good of the city, showing up their hypocrisy and arrogance in ways that went far beyond the standards of good taste, securing the ire (and sometimes the retaliation) of his powerful targets. He showed his contemporaries, and he teaches us now, that when those in power act obscenely, patriotic obscenity is a fitting response.

Aristophanes’s satirical masterpieces were also surpassingly virtuosic works of poetry. The metrical variety of his plays has always thrilled readers who can access the original Greek, but until now, English translations have failed to capture their lyrical genius. Aaron Poochigian, the first poet-classicist to tackle these plays in a generation, brings back to life four of Aristophanes’s most entertaining, wickedly crude, and frequently beautiful lyric comedies—the pinnacle of his comic art:

· Clouds, a play famous for its caricature of antiquity’s greatest philosopher, Socrates;
· Lysistrata, in which a woman convinces her female compatriots to withhold sex from their warmongering lovers unless they negotiate peace;
· Birds, in which feathered creatures build a great city and become like gods;
· and Women of the Assembly, Aristophones’s most revolutionary play, which inverts the norms of gender and power.

Poochigian’s new rendering of these comic masterpieces finally gives contemporary readers a sense of the subversive pleasure Aristophones’s original audiences felt when they were first performed on the Athenian stage.

To read the comedies of Aristophanes is to see the Greeks as they saw themselves. These are some of the liveliest, most surprising plays to have come down to us from antiquity. Bawdy, ribald, and thrillingly modern, they have the capacity to overturn everything you thought you knew about the ancient world. In this bold and earthy translation, Aaron Poochigian gives us Aristophanes as the Athenians knew him: mischievous, daring, yet somehow very endearing. You cannot help but smile as you turn these pages.
—Daisy Dunn, author of Catullus’ Bedspread and The Shadow of Vesuvius


Aristophanes was a funny, often obscene, social commentator, and he was also a brilliantly fluent, wide-ranging poet, whose lyric rhythms were recited and sung to music, with dancing. It’s very rare for modern translators to convey his poetic virtuosity or make any attempt to bring his meters to life. But Aaron Poochigan has achieved this feat, crafting polymetric translations that convey the whole range of Aristophanes’s larger-than-life characters and provocative, alternative reality scenarios. This new Aristophanes is zany, sharp, inventive, vivacious, and surprisingly relevant for our times.
—Emily Wilson, translator of Homer’s Odyssey

Poochigian has reanimated this quartet of Greek dramas with an approach that conveys all the comic energies, political urgencies, and philosophical concerns of the original plays. Alive and alert to the evolutions and mutations of contemporary language but tuned to the pitch and rhythms of ancient literature, these energetic and adroit twenty-first century translations are both effortlessly readable and genuinely theatrical—as lively on the page as they will be on any stage.
—Simon Armitage, Poet Laureate of the United Kingdom

Aristophanes, (born c. 450 BCE—died c. 388 BCE), the greatest representative of ancient Greek comedy and the one whose works have been preserved in greatest quantity. He is the only extant representative of the Old Comedy—that is, of the phase of comic dramaturgy (c. fifth century BCE) in which, mime, and burlesque still played a considerable part and which was characterized by bold fantasy, merciless invective and outrageous satire, unabashedly licentious humor, and a marked freedom of political criticism. But Aristophanes belongs to the end of this phase, and, indeed, his last extant play, which has no choric element at all, may well be regarded as the only extant specimen of the short-lived Middle Comedy, which, before the end of the fourth century BCE, was to be superseded in turn by the milder and more-realistic social satire of the New Comedy.

Aaron Poochigian earned a PhD in Classics from the University of Minnesota and an MFA in Poetry from Columbia University. His thriller in verse, Mr. Either/Or, was released by Etruscan Press in the fall of 2017. A recipient of an NEA Grant in translation, he has published translations with Penguin Classics and W. W. Norton. His latest book American Divine, the winner of the Richard Wilbur Award, came out in 2021. His other poetry collections are Manhattanite (Able Muse Press, 2017), winner of the 2016 Able Muse Book Award, and The Cosmic Purr (Able Muse Press, 2012). His work has appeared in such publications as Best American Poetry, the Paris Review and POETRY.