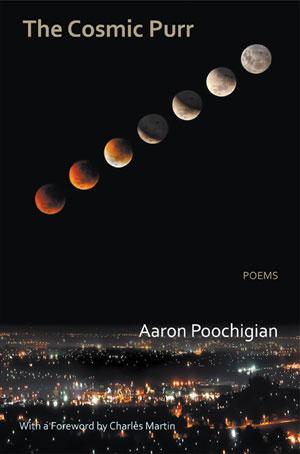 — Poems by Aaron Poochigian
(with a Foreword by Charles Martin)

The Cosmic Purr
— Poems by Aaron Poochigian
With a Foreword by Charles Martin
Paperback ~ $16.95

The Cosmic Purr is the first collection of original poetry from Aaron Poochigian, well-known for his translations of Sappho, Aeschylus, Aratus and Apollonius of Rhodes. From the mythical to everyday themes, from the landscape of North Dakota to scenes in a bar, at a marriage ceremony, before birth or before death, Poochigian’s verse is enlightened by uncommonly fresh wisdom, and deployed in the delightfully masterful, elegant and naturally-flowing metrical forms his translations are known for.

PRAISE FOR THE COSMIC PURR:

Aaron Poochigian’s technique is masterly, the tone tends to be tart, disillusioned, cryptic, and elegant, and it’s easy to be beguiled by these poems’ wit and bravura. But the pyrotechnics are used to serious ends, and the scenes that are fitfully illuminated, whether they occur in landscapes as quotidian as contemporary North Dakota or as otherworldly as mythical Greece, whether they are chilling or exhilarating, are always immediate in their reality, and they speak to the reader with a compelling cogency.
– Dick Davis

Aaron Poochigian is both a classicist and a neo-classical poet. By this I mean that he prefers as subjects the common occasions of our lives and articulates them uncommonly, in verse rich with the kind of detail that becomes a style passed on in an act of friendship between him and the poets of the past who have served as his mentors.
– Charles Martin (from the "Foreword")

It is a delight to have some of Aaron Poochigian’s modern New York replies to famous Sappho poems. Reading them is like eavesdropping on a New York wise guy discussing the “night before” with a classical scholar: sexy, witty, learned, and moving. Worth hearing, worth re-reading, too.
– Diana Der-Hovanessian

What is the cosmic purr? Pussycat poet Aaron Poochigian is the one to show us in his ebullient lines. He returns where he started—to the northern plains—then spins on a dime to the wider world “where life was all night long / drinking and dancing, bursting into song.” In “The Parlor” he nods ironically to his Armenian heritage, and a few pages later he lights an elegiac candle for a dying friend. A major translator from classical Greek, Poochigian offers in his own poetry a hip formality, a timeless sense of the contemporary, and when he brings the classics into this scene they live again as freshly as ever.
– David Mason

Aaron Poochigian was born in 1973. He attended Moorhead State University from 1991 to 1996 where he studied under the poets Tim Murphy, Dave Mason and Alan Sullivan. He entered graduate school for Classics in 1997 at the University of Minnesota. After traveling and doing research in Greece on fellowship from 2003 to 2004, he earned a Ph.D. in Classics in 2006, and now lives and writes in New York City. His translations, with introduction and notes, of Sappho’s poems andfragments were published by Penguin Classics in 2009.
His translations of Aeschylus, Aratus and Apollonius of Rhodes appeared in the Norton Anthology of Greek Literature in Translation in the spring of 2009, and Johns Hopkins University Press published his edition of Aratus’ astronomical poem, The Phaenomena, with his introduction and notes, in the spring of 2010. His poetry has appeared in numerous journals, including Arion, The Dark Horse, Poetry and Smartish Pace.